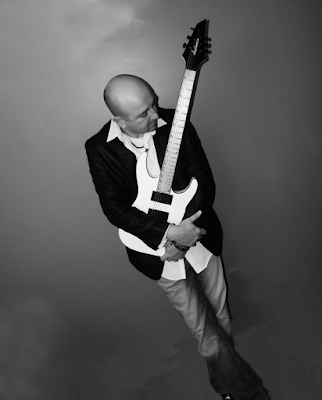 ATLANTA, GA – Jason Caldwell is ready for his big break. It’s long overdue. After nearly two decades of touring with bands and collaborating with other artists to create great rock music, he’s ready to show the world just how talented he is as a solo artist.

His new four-song EP entitled “Forgotten” is a statement to the world that he’s the next big rock star to pay attention to in America. It’s an EP that showcases his diversity and illustrates the kind of rocker he is – from shredding guitars to three-part harmonies and even piano riffs that will remind fans of great rock legends.
“All four songs are completely different songs,” he said. “One has more hard-punch rock and roll, one gets a bit weirder with an almost rap or hip-hop feel, one goes into something more melodic, and the last song is all pianos and vocals. But it all flows together.”

The title track of the EP is actually the second song of the bunch and serves as the ultimate testament of where he is currently as a musician. After touring in bands with his older brother for many years, and then playing with a band on a cruise liner for nearly a decade, he has put in the grind and perfected his art to thousands upon thousands of crowds. But never over that time has any of his solo efforts broken beyond regional success.

“No matter how many likes I get on Facebook or through any other social media outlets, when I share my stuff not very many people seem to click on it,” he said. “It’s hard to get interaction. And I think that’s because people are over-saturated with constant media. It aggravates me. One day they’ll be sorry. As soon as there’s a little push and popularity, everyone jumps on the band wagon. That’s happened to me before with other bands I’ve been a part of. And ‘Forgotten’ talks about that rise-and-fall of success.”

Another of the singles on the EP is a track called “Drinkin’ Again.” Caldwell said it’s a song about having a bad hangover that he literally wrote while experiencing the worst hangover he’s ever had. It happened after returning from his best friend’s bachelor party in New Orleans, and it was one of those moments where he had to create music and he was lamenting how poorly he felt at the moment.

“It’s about that hangover when you tell yourself you’re never drinking again, but you know you’re going to,” he said. “In that moment you’re committed because you just feel terrible.”

Another of the singles is “Mourning Sad Days,” which Caldwell said was inspired by his work as a videographer for news stations and having to cover awful tragedies such as the Charleston shooting. The song is a long, epic build-up of emotion that culminates in dramatic fashion.

The final single on the EO is “A Sad Song,” and it features piano and vocals with some electronic sound effects in a style that’s a nod to the rising wave of electronic rock. Caldwell said he wants to showcase his ability to create good music through all sub-genres of rock, and “A Sad Song” is not only his display of that ability but also a song that he hopes will inspire others to keep their heads up when going through tough times.

Fans who want to find out more about Caldwell can visit his website at jasoncaldwellmusic.com, or check out some of his music on Soundcloud or YouTube. Fans can also purchase “Forgotten” on iTunes. And to find out more about upcoming music releases or live performances, fans can follow him on Facebook, Instagram and Twitter.

Posted by ashleyburnett at 11:10 PM