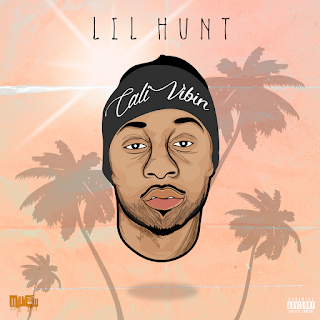 FAYETTEVILLE, NC – Sedale “Lil Hunt” Hunter has been writing poetry since the age of 10. He’s also been around music all his life. It’s something that has inspired him for as long as he can remember, so in his opinion it was perfectly natural for him to evolve into a musician as he grew older.

He didn’t start out as a solo artist, however. For many years he was content to stay in the background and help friends finish their lyrics. He didn’t start taking music seriously for himself until about a year ago when he came to North Carolina and joined a friend in the studio.
“I loved his energy and I decided I wanted to give it a try,” Lil Hunt said. “I went straight home and wrote my first song, ‘Alpha.’ It was about a lot of hood and gangster-type stuff, but I took it into the studio and asked the producer to put on a beat so that I could just spit. My homeboy was in there and he heard me and told me I needed to make it a career because I got bars and the energy I give off is crazy. Ever since then I’ve been challenging myself to do different stuff. My music talks about things that most people go through on an everyday basis, and though that first song was gangster, everybody in the game is doing the thug thing nowadays and I want to be different. I’m digging deeper into personal stories and trying to fold that into the music.”

His 10-song mixtape “Cali Vibin” is his most recent display of raw talent to the world. He said it’s a project that has a distinct West Coast vibe while showcasing how diverse he can be when it comes to music.

“The first single off the mixtape is a song called “Ain’t Stop A Nigga.” He said the idea of the song came from a personal experience of selling his music on a popular downtown thoroughfare in Fayetteville, North Carolina when suddenly he was mugged and robbed.

“Apparently while I was selling my music somebody was scoping me out and seeing I was making money,” he said. “I got jumped, and they took everything – all my CDs and my money. But this song says you can’t stop me, even if you jump me. There’s nothing you can do to stop my momentum and vision. I don’t dream … I’m too young to dream. I have visions, and I envision myself performing with the likes of Lil Wayne and other big names.”

“Ain’t Stop A Nigga” is currently available for purchase on iTunes and Spotify.

The second single off the mixtape is “Late Nights,” and it’s a track that he said is specifically designed for the ladies.

“It’s a song that starts with getting that call from your lady who tells you she misses you,” Lil Hunt said. “You respond by telling her you’re on your way, and all the while she’s sending you pictures and messages and you know exactly what’s about to go down the moment you get home. It has more of an R&B feel to it, and the producer worked it out so that we could get some nods to Janet Jackson in the background.”

“Late Nights” is currently available for fans to listen to on Lil Hunt’s Soundcloud page. To find out more about upcoming music releases or live performances, fans can follow Lil Hunt on social media on Instagram, Facebook and Twitter.

Posted by ashleyburnett at 11:45 PM