Cello Denali was born July 30 1990 and was raised in Memphis TN. Cello has been into music since the 7th grade. The art of music was in Cello denali's bloodline due to the fact his father Marcellus Jackson Sr worked with legendary J Blackfoot also of Memphis. The passion that Cello has for music grew even greater when his older brother (Marcus Scott) lost both of his legs in a motorcycle accident a few years back. Cello felt that it was up to him to take his family to the top and he has been going hard for his dream ever since. This song was inspired by "Netflix n Chill"...this is the type of song that sets the mood right when the movie isn't the main focus. The song speaks for it's self, just pop it in and it's going down.

Atlanta’s own DAEtrius responds to Ebro Darden’s call to action with The EBRO Demo EP.

Inspired by Ebro Darden’s comments to Jermaine Dupri during a recent interview about the current state of Atlanta’s hip-hop music scene, DAEtrius, 22, takes a quick break from recording his debut project to prove the “ the south has something to say”. On The EBRO Demo, DAEtrius weaves an interesting narrative that begins with "Ebro asking Atlanta artists to “step their bars up” and ends with a Peter Rosenberg/Raury interview where Rosenberg gives a heartfelt mention of DAEtrius as one of the Atlanta artists currently making dope music. In between these sound bites, DAEtrius makes a strong statement for himself and his hometown; honoring Hip-Hop’s birthplace while staying true to his Atlanta roots in just four songs. On each track, DAEtrius displays versatility, sharp lyricism, personal storytelling and song writing abilities. The EBRO Demo is a reminder that legendary artists like Outkast and T.I. came out of the south. If this project is any sign of what’s to come, the future of the south is in good hands. 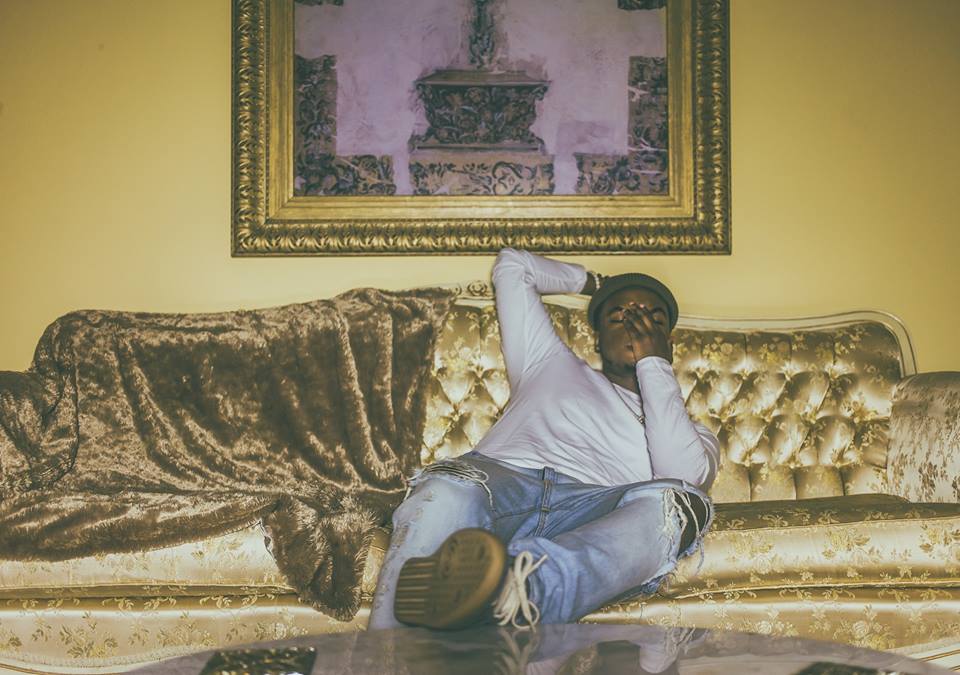 The EBRO Demo will be available on Apple Music and all other platforms on Thursday, June 30. This concise, yet complete EP is mostly produced by up-and-coming producer Epikh Pro (Bryson Tiller, R. Kelly, Tamar Braxton, Royce da 5 9) and also contains production from famed producers The Olympicks (Rick Ross, Lil Wayne, ASAP Rocky). On the EP’s lead single “Parades” (feat. KO/Produced by Epikh), DAEtrius explains how the music scene is analogous to a cavalcade. He showcases why he should be on the lead float of the procession with lines like:


“Part rivers in these Hudson Jeans/ build bridges, on my Dr. King/ I want my dynasty on A&E/ Ain’t nobody A as me/ Stiil F*ck with Ebro/ Yeah, I did this sh*t for Pete/ I got something to say feeling like I’m 3/ Stacks, all my cards stacked/ N*gga play with me”

Be on the look out for DAEtrius’s first full-length album, PERCY PARK this July. Stay up to date with all of the latest DAEtrius news via http://www.DAEtrius.com

Even though DAEtrius, 22, is preparing to release his first full-length project PERCY PARK this July, he isn’t new to the music scene. Honing his skills since the young age of 11 while being around the presence of Gucci Mane, Waka Flocka, and Nicki Minaj, this polished Atlanta artist is primed and positioned to make a major impact on the music scene. After taking Atlanta’s A3C music conference by storm last fall (performing on several stages and even in the streets!), DAEtrius brings his music to the world with The EBRO demo this month, and PERCY PARK later this summer. His strong lyrical ability, versatile song writing skills, relatable disposition and engaging stage performance will put him head and shoulders above the rest.

Rico Richie and 2Chainz team up w/ producer Cassius Jay to bring us hot new street banger "APE". Track is being serviced by the Streets A&R, feedback and support is greatly appreciated.

AOG x 1017 link up to drop "Finesse" by Ricky Ruckus featuring Gucci Mane. Track is being serviced by Street Execs and the Streets A&R, Bigga Rankin. Support and feedback is greatly appreciated.

via LaLaaShep >> Memphis is proving to be a city that breeds talent as its birthed Hip Hop heavy weights, Three 6 Mafia, Eightball & MJG, Yo Gotti, Young Dolph, and most recently, Blacc Youngsta. Rising artist, MoneyBaggYo is the next artist to projected to blow from the city as he has the support of his peers and elders. During a recent visit to Atlanta, MoneyBagg Yo & I discussed his relationship with Yo Gotti and Young Dolph; Working with Trouble and Migos; Making it out of Memphis; Kids looking up to him; The independent hustle and Nless Entertainment & more! All interviews shot & edited by LalaaShep! Stay tuned for more exclusives and behind the scenes footage with Lalaa @LalaaShep @TheProgressReport101 www.LalaaShepard.com YouTube/ LalaaShep
Posted by Bigga Rankin at 5:25 PM No comments:

Florida's very own Papa Duck is back with another mixtape that is for sure going to get the clubs bouncing again. After his last project "Duck Dynasty", Papa Duck took his show on the road to promote the mixtape and give the fans what they love. If you've never heard Papa Duck's music or been to one of his shows, you are missing out on one of Florida's hottest independent artists. As each project is released Papa Duck shows and proves exactly why he has outlasted many artists and continues to push on with his Street Loot Music Group label. "Str8 Gas" not only will give his current fans their much needed Papa Duck fix, but also make believers out of anyone that has doubted the talent that he brings with every bar and delivery. Support by listening, downloading, and sharing this mixtape. Tell the promoters in your city to bring Papa Duck because the only thing better than a Papa Duck mixtape is a Papa Duck show.

Who is Lac Man >>> Upcoming producer engineer and artist I go by the name of LacMan people call me Lac for short..I am BMI registered, I have a production team that goes by the name or Immortal Musicians and also affiliated with a few record labels JohnsonBoyzEnt, MoneyOutThaAzzEnt, and RealLifeEnt..I've been creating my own music for a long time I took a break for about two years to take care of things and now I'm working on a couple projects as we speak...I also do a lot of other things outside of music but music is one of those things that I gotta have more than anything it keeps me sane and being able to create it and produce it is one hell of an accomplishment for me...I'm all about growing and developing my skills..

Paul “Lua Proc” Harris was born and raised in Pittsburgh, Pennsylvania. Lua Proc has always had a passion for music, growing up in the era of raw hip-hop he took a passion into lyricism. Taking after his Mother, Nina Ross’s entrepreneurial spirit and acknowledging that hard work pays off; he let his losses and setbacks fuel the energy to generate stability through his music career and independent label, High End Society.

As an artist he has shared the stages throughout the country with the likes of Busta Rhymes, Nicki Minaj, Lil Kim, Juvenile, and more on his journey. Lua Proc is currently working on his debut album titled, “Fish Tailing” which is set to release in the beginning of 2016. Lua Proc’s first two singles released from “Fish Tailing” has radio chart and major network placements. His singles, “Work” featuring Kevin Gates and “Flexxin’” are currently rotating in full swing on the radio. He has also had play at Mixshow Live Core DJ Retreat, Coast 2 Coast Mixer, Power DJ’s Listening Session and the recent BET Hip Hop Awards. In 2015, Lua Proc has been featured in XXL Magazine, Hype Magazine, and some of the most popular blogs and social sites on the net for urban/hip-hop music. As Lua sets to release his 2nd visual from “Fish Tailing”, titled, “Retarded” featuring Young Buck he is also gearing up to open on the road for Kirko Bangz’s, Playa Made Tour starting in February 2016. Be on the look out for more big things happening this year for Lua Proc. Lua Proc also just completed Twista's Living Legend Tour in May 2016, working towards his first official release entitled "Fish Tailing" thru Altavoz Distribution for July 2016 Paul "Lua Proc" Harris is slated to be a Pittsburgh native to represent nationally on the music scene. Twitter: @LuaProc IG: Lua_Proc Booking: Luaprocbooking@gmail.com Website Luaproc.com
Posted by Bigga Rankin at 12:47 PM No comments:

THE MULTIPLATINUM, GRAMMY NOMINATED, BASSKINGZ AKA THE 69BOYZ ARE BACK TO HEATUP THE DANCE FLOOR WITH ANOTHER SUMMER ANTHEM. THICK GIRLS WINNING IS THE LATEST RELEASE AND THE VIDEO, SHOT BY OMAR THE DIRECTOR (PLIES/RITZ CARLTON...RAN OF ON THE PLUG) IS ALREADY MAKING WAVES. FROM TOOTSEE ROLL TO #ThickGirlsWinning THE 69BOYZ KEEP THE DANCE FLOOR ROCKING!! RESPONSIBLE RECORDINGS...WE MAKE THE WORLD DANCE!! CATCH UP WITH THE 69BOYZ ON INSTAGRAM OR TWITTER @thrilldaplaya @fastcash69boyz @slowmoney69 AND FOLLOW THEIR FANPAGE ON FACEBOOK HERE CONTACT DIRECTLY: gfl_live@yahoo.com OR (850)322-9519
Posted by Bigga Rankin at 11:11 AM No comments:

[Single] T-Raw ft Rufus Blaq - What I Look Like

Tampa, Fl: College Hill Music Group's very own, T-Raw is back with another street anthem. After a brief hiatus to regroup, he is under management with Big Amp, one of Florida's pioneer tastemakers and ready to take his brand to the next level. T-Raw is known for getting the party started with his street bangers and the latest Trac Felonz prod record "What I Look Like". "What I Look Like" features Rufus Blaq and this duo make for a great sound. There is no need to talk your head off because T-Raw is the type of artist that prefers less fluff, he lets the music speak for him. Listen, support, and download this track today. Feedback is GREATLY appreciated.

The Tampa Music Conference is an annual event with additional focuses on promoting artists through Social Media year round. Established in 2004 by Angel and Carol Soto it has consistently been hailed as one of central Florida’s most successful music networking event. The TMC has been held at various venues such as the Tampa Conventions Center, T-Pepin’s Hospitality Centre, The Ritz Ybor and other locations. The 2016 edition will be held at the A La Carte Shrine Pavilion. The object of the TMC is to connect those aspiring to be in the music business with industry professionals and established acts from Tampa and around the country. It is an opportunity to not only learn, but to network with them. Watch the video below and let us show you what the Tampa Music Conference is all about. Make sure to log onto http://www.tmconf.com/ today to register, learn about sponsorship and more! Tampa Music Conference 2015 from Symphonic Distribution on Vimeo.
Posted by Bigga Rankin at 8:42 AM 1 comment:


Posted by Bigga Rankin at 8:18 AM No comments:

Posted by Bigga Rankin at 6:24 PM No comments: