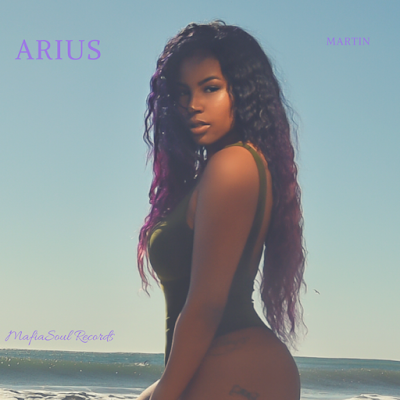 LOS ANGELES, CA – In Greek Mythology, Pandora’s Box was a dangerous object that when opened first elicited good things but which eventually unleashed a mountain of problems. It’s a story that has become a metaphor in popular culture for unfiltered emotions, which is what Southern California singer Arius hopes to present to her fans with a new 10-song EP entitled “Pandora’s Box.”

“It’s an EP that showcases a bunch of different things that I go through or that I see other people go through,” Arius said. “I do a little bit of rap on the album, but it’s mostly singing. And I think I have a unique sound. A lot of people when they hear it say they know it’s me immediately.”

Though only 22 years old, Arius has already caught the eye of some bigger names within the recording industry. She’s currently working with Grammy-winning writer Kam Parker, and producers P.Kaldone, Count Justic, A|C, NickEBeats, Jake Broido, IsaacFlame, De-Capo and Alex Mesvudi. Her first feature – on the song “Everywhere I Go” by Bueno – has more than 14 million views on YouTube, Facebook and Soundcloud combined.

The first two singles off her new EP are called “Caribbean Girl” and “Martin.” The first is a song that she said has a definitive dance vibe with lyrics that could serve as a warning to people who chase dreams that they shouldn’t be chasing.

“It’s basically about a woman who is insecure in herself and thinks that money is what will make her happy,” Arius said. “She’s a dancer who meets a guy who genuinely loves her, but she’s all about getting the money and doesn’t know how to reciprocate that love. She ends up messing up the whole relationship and realizes at the end that he really did love her and she ends up lonely.”

The second single, “Martin,” is a slightly more introspective song that describes the feelings of finding your soul mate.

“I felt like before I had found the one, but it wasn’t until ‘Martin’ that I actually found the person who was for me,” she said. “Some of the lyrics say, ‘Back then I didn’t know myself. / I thought I was in love, but I wasn’t. / Now I’m finding out what love really is.’ That’s essentially what the song is about – thinking you know what love is but then realizing you really didn’t once you find that one person who helps you understand what real love is.”

Arius said when people listen to her music she hopes they get the same emotions out of it that she feels when creating and writing them. Some of her music, she said, is fun and will encourage dancing. Other pieces of her music is love music, and still more offer a variety of laid-back chill that fans could listen to while driving around town or cleaning the house.

“What I listen to other people’s music for, that’s what I want from my own music now,” she said. “Five years from now I want to be well on my way to a Grammy. I want to be on two tours, at least, with another EP and a full album out. I want people to recognize me and to be an established artist.”

Posted by ashleyburnett at 10:37 AM