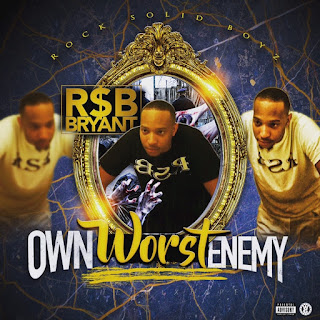 BALTIMORE, MD – Though Bryant Clark’s father had a deep appreciation for rap music, he never wanted his son to embrace the lifestyle of a professional musician.

That’s not to say that he didn’t influence the musical preferences of his child by always playing rap music around the house. In fact, Jadakiss, Tupac, Bone Thugs N Harmony, Eminem, Jay Z and more were frequently played by Clark’s parents as he was growing up. And so it was almost inevitable that he would become a professional hip-hop artist – despite what his father hoped would happen to the contrary.

Today, Clark is ready to take that music career to the next level by releasing his first mixtape, called “Own Worst Enemy.” It’s a 13-track collection of songs that he said showcases his versatility as an artist and his natural ability with flow.

“The name comes from the fact that I can be my biggest critic sometimes,” he said. “When I make mistakes in life I’m my own worst enemy. There are times when I’ll take four steps forward and then two steps backward. Every time I think I’m doing something great I’ll look in the mirror and realize I’m not as great as I thought. And during those times I just keep working hard and try to keep getting better and better at what I do.”

The first two singles off the mixtape are “Go Getter” and “Three Minutes of Bars.” The first is a club record that Clark said will be perfect for people to play at dance parties or in the club. He said it’s a song that features mostly rapping throughout, with a catchy hook toward the end.

“Three Minutes of Bars” is an even more intentional showcase of his rapping skills as it is literally just Clark rapping and snapping on it.

“It’s me showing you that I think I’m one of the best,” he said. “What I’m giving you is just three straight minutes of bars.”

Clark said he hopes people will listen to this mixtape and realize that his is a fresh new sound on the scene.

“I’m bringing something organic,” he said. “I don’t sound like any other rappers out there. I’m trying to sound different. I’m bringing a new style to the game because everybody sounds like everybody else it seems like right now. I’m very unique. I’m original. I don’t think you can say I have a specific style because I can do anything. What I do is very different in a highly intriguing way.”

Clark said he’s in the studio right now working to complete “Own Worst Enemy,” which he said he plans to drop sometime in July or August. Fans who want to find out more about his music or upcoming releases can follow him on Twitter @Rsbbryant, on Instagram @Rsb_bryant, or check him out on Soundcloud at RSB Bryant.
Posted by ashleyburnett at 1:25 PM