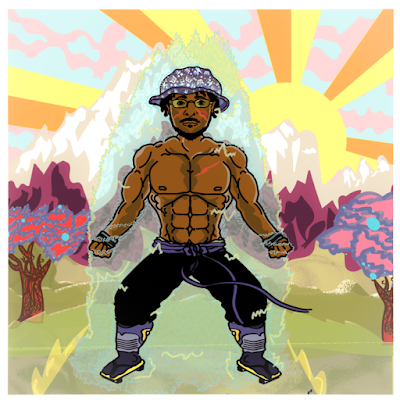 HOUSTON, TX – It’s the artistry behind making music that is the most attractive thing to Kush O’Keeffe – one of the hottest-rising producers and recording artists coming out of Palestine, Texas. His stage name reflects that passion for good art – combining the Middle Eastern term of “Kush” – which stands for royalty – and the last name of feminist painter Georgia O’Keeffe – whose art has inspired him for years.

“I’m intrigued by her whole side of life,” he said. “She was painting and she was damn near blind. I feel like that sometimes. I made a whole project revolving around her name and her portraits. I’d look at them online and then make beats around them. She made me re-think stuff. If she was a rapper, she’d be the person I’d go to because she was just a down-to-earth person who stayed true to what she did until the day she died. If I could rap when I’m 80, that would be awesome.”

“But ultimately it’s the art that fuels my music,” he continued. “Why wouldn’t you love art? Could you imagine a bland world – a non-vivid world? You’d hate it. Music and art are hand-in-hand because it emotionally draws you in. If you’re knowledgeable of art, it can take you to other levels that you wouldn’t imagine. The art can be the soul and the edges of the music. Music by itself would be shit without the artistry of it. You have to have the art. If you have no sense of the art, you’re just speaking a bland message. Good art opens your mind.”

The most recent display of his art comes in the form of a nine-track album entitled “Black Manga.” Like everything in his life, the title of the album is intentional and points not only to the art that can be found within the music, but also to his current state of mind and position in life.

“I don’t feel like everyone else right now,” he said. “I feel like myself. That’s the whole concept. It was designed specifically with that in mind, and if you listen close you’ll get that. It has a lot of new features, but not a lot of over-the-top production that you tend to hear in hip-hop today. It just kept it simple. It’s unexpected. It’s current – it’s today, but it’s my version of today. It’s not the rap world’s version of today. I took what’s going on today and I put my own spin on it.”

It’s a process that he said he does a lot with his own music, and helps others do with their music when he collaborates with them as a producer. In fact, he doesn’t consider himself to be a performer or even a rapper – choosing instead to avoid labels and just rest in the experience of creating music.

“I just like making music,” he said. “I like making beats and I’m pretty good at what I do. I have a laid back approach. One of the things that I think is messed up with a lot of music right now is that everyone is trying too hard to make it big. I don’t try hard, I just make music. I write sick lyrics and I love making music.”

Fans who want to sample some of his music can find his album on Datpiff, or check out some of his music videos on YouTube. Fans can also follow him on social media @kushycoo on Instagram, @KUSHOK33FF3 on Twitter, and as Kush O’Keeffe on Facebook.

Posted by ashleyburnett at 12:29 AM