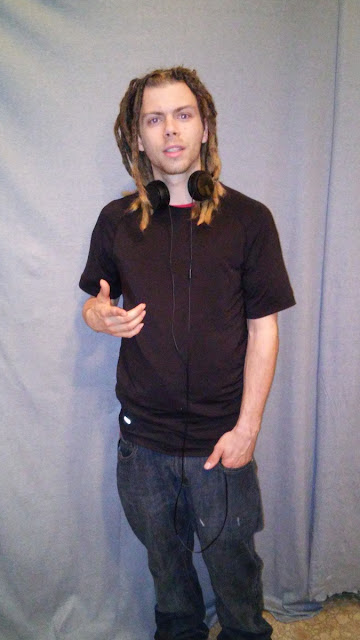 SHELBY, NC – For as long as he can remember, Aaron Lee has been able to make people laugh.

In fact, to hear the hip-hop artist and stand-up comedian from Shelby, North Carolina tell it, he was born and people started laughing.

“I’ve always been laughed at,” he said. “I don’t know why, but I figured if you’re going to laugh anyway then I’ll give you a reason to laugh and be a comedian. Plus, you can’t get mad at what I say because I’m always joking.”

The young artist from the East Coast is working to establish himself in both realms of hip-hop and comedy. He’s launched some samples on a YouTube page, and already he’s beginning to grow a fan following.

But opportunities like those were almost one car crash away from not being around. About a year ago Lee hit a tree going almost 60 miles per hour. Amazingly, he walked away from the crash with only a major concussion and an injury to his eye. But it was an experience that made him realize the frailty of life and how fleeting opportunities can be.

“I woke up in the car and ever since then I’ve been working on rebuilding my life,” he said. “Every time I sit behind the driver seat of a car now, I get pretty nauseous. I know that I might not be here tomorrow, now. You say you know that, but when you go through something like that it lets you know for real. It let me know that if I want to be a comedian or a musician or an entertainer, then I have to do it now and not wait until tomorrow. Instead of putting in resumes at some regular nine-to-five job, I have to take a chance on what I love. There are always going to be roadblocks, and money will come and go, but I just had to do something to chase that dream.”

When it comes to making music, Lee said he wants to bring back the originality of rap and tries to shy away from mimicking what other artists are doing nowadays. His new single, “Don’t Take It For Granted,” is the perfect example of that mentality. He said it’s a blend of old school and new school hip-hop. The lyrics talk about the lessons he learned after the car crash, and though it’s upbeat with a chill vibe, the message behind it is serious with a tone of inspiration.

“When I was younger I would listen to Eminem and Tupac and I just fell in love with that kind of music,” Lee said. “I also loved 50 Cent, Lil Wayne, T.I., Boosie and Young Jeezy as artists I grew up on. As I’ve grown older I’ve become impressed by how they did something that it takes a lot of hard work to do. They were inspired by the drive they had within themselves, and that inspiration poured out onto others. And now I’m inspired and I want to try to do what they do.”

“Don’t Take It For Granted” is currently available for purchase on iTunes. Fans who want to find out more about Aaron Lee and his music and comedy can follow him on social media on Instagram, Twitter and Facebook.
Posted by ashleyburnett at 5:13 PM