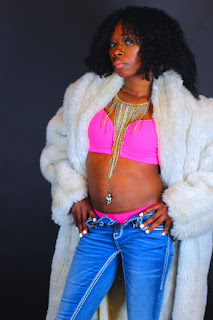 CINCINNATI, OH – In the moments before Belinda Murphy’s mother passed away, she impressed upon her daughter a desire to see her continue the family’s legacy. As a woman of faith who had taken her family from poverty in Jamaica to middle class in America, she was someone who exhibited beauty, grace and compassion every day of her life. And those are all qualities that Murphy hopes she is known for.
It’s for that reason that faith finds its way into her music and videos. When performing at Bebe The Jamerican G, she hopes that others see a woman who has overcome struggles in life and who now lives out those same qualities that her mother represented for so many years.

“I hope I stand out because I’m always striving to be positive and humble and have faith in myself and keep my faith in God,” Bebe said. “My mother always taught me to believe in God and never be disrespectful toward people. I’m really soft-spoken, but at the same time I can be bold. I’m also very ambitious and I believe we’re all from God and all destined to do something on this earthy. Through all of my trials and tribulations, I’ve been able to maintain a good heart. I am genuine and understanding and I recognize people for who they are.”

Her new album entitled “Versatile Legacy,” details her journey from struggle to success and highlights those very same qualities that she’s trying to represent from her mother and family.

“One of the singles talks about my old lifestyle in Cincinnati,” she said. “I was into drugs heavily and I was getting into trouble and had domestic violence issues. I learned to overcome all those obstacles by the faith that I put in God. I went on my knees and prayed and gave it all to Him. He has steered me in the right direction and I let him guide me the rest of the way.”

Bebe said her journey to music started at a young age, when she began singing as a young girl. She said her mother would often have her sing for friends and family whenever they were over to the house. Eventually she started writing poetry, and though she went to college to study graphic design, the music always called back to her. Eventually she decided to pursue music full time, and hopes someday to be able to launch her own record label called Bell Records and provide other local artists a way to express themselves.

Until then, she’s anxious for fans to check out her music and find out more about who she is as a person and as an artist.

“When people hear my music I want them to feel where I came from,” she said. “I want them to say, ‘If she can do it, I can do it, too.’ I want them to be inspired – to look at me as a talented and gifted person in this world who has been through struggle and come through, and want to do the same thing in their lives.”

Posted by ashleyburnett at 3:08 PM