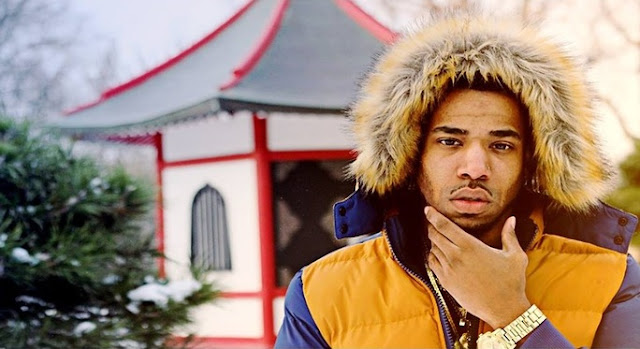 MINNEAPOLIS, MN – The origins of Suga Shane’s nickname are more simple than you might think. While it is a name that he uses because of how well it rolls off the tongue, it originally started as a nod to his eating habits.

“I always keep a bag of sugar with me and pour it on everything,” said the R&B artist from Minneapolis, Minnesota, who originally was born and raised in Waterloo, Iowa. “All throughout high school I’d always put sugar on my food – even my chips. Plus, cake is my favorite food. So long before I even had a music career I got that nickname. But it’s a good one and everybody knows me by that name so I’ve stuck with it.”

Today Suga Shane wants to be known for more than just quirky eating habits. He’s ready to display to the world an up-and-coming artist who’s sick lyrics and unique sound is something that people need to sit up and take notice of. His new 15-song album, “Streets to the Sheets,” is an R&B-infused project that hearkens back to the sounds of the 1990s. Though a wide variety of artists have influenced him over the years – including Tre Songs, Michael Jackson and Ginuwine – it was the R&B greats of the 1990s who first introduced him to a love of music.

“I was born in 1992 and coming up my parents listened to 90s R&B,” he said. “It’s soulful and harmony-based, which is how I want my music to be. My style of R&B is different from the typical 2017 style. Mine comes from the old school. You’ll hear falsetto and four-part harmonies. In fact, I do vocal training every week and you’ll hear those good vocals on this album.”

Suga Shane said his journey to professional artist was a different route than what might be expected for a guy from a family filled with musicians. Both his mother and sister are Gospel singers, and his brother is a rapper. But Shane was always an athlete and played basketball throughout high school and got a scholarship to play in college. But he injured himself in college and lost his scholarship. Instead of letting that experience drag him down, he turned his attention to something he’d always been good at but had never pursued seriously – singing.

By the winter of 2013 he’d put out his first project, and he just kept building and building from there. Not long after a record label discovered him and signed him. NU Music Group LLC released his first mixtape “Layback Music 2.” He began gaining a large amount of fans and supporters, and today he is in high demand for paid performances and song features because of his catchy hooks and 90s style that infuses his own harmonies. It also helps that his lyrics are laced with sexual content and he has the looks to drive the girls crazy.

“My first single is called ‘Sex to Blame,’ and it’s one of those songs that calls out those dudes who have a lady who is unsatisfied,” Suga Shane said. “The song says my sex isn’t the same as another man’s. Women want to come back to me because I’m not hitting her with the stuff of another man. I’m more special and better than any other man.”

The music video for the single highlights this idea, following Suga Shane through a reenactment of the popular 90s movie “How to be a Player” and watching as he has multiple different women in different scenes. Though it’s a song and video that he hopes fan have fun with, at the end of the day his music is more about connecting with people.

“I want them to feel it,” he said. “I want them to really get the soulful side of everything I say. Some people have writers or write music that isn’t true to them. Mine is real stories and experiences I went through. I create music that helps you create pictures and visuals to see what I’m talking about. There’s a real-ness to it. It’s not cliché. When you listen to my music you can feel the real-ness in the way I sing and the lyrics I write and how I say things. You can feel where I’m coming from.”

Fans who want to check out “Streets to the Sheets” can purchase the album in iTunes, or download it via Catapult Distribution. Fans can also check out the music video for “Sex To Blame” on Suga Shane’s YouTube page. To find out more about upcoming music releases or live performances, fans can follow him on Facebook @officialsugashane, on Twitter @SugaShaneLBM, on Instagram @officialsugashane, and on Snapchat @Sugashane_3203.

Posted by ashleyburnett at 10:17 PM