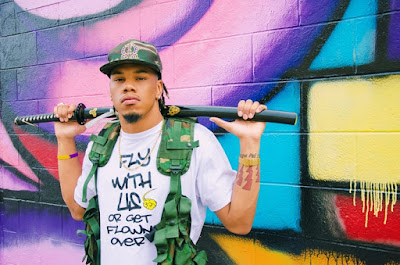 Hailing from the small town of Murfreesboro – just 35 miles from Nashville, Tennessee – Jitsu is an up-and-coming hip-hop artist who creates music for a widely diverse audience.

“The music I make is attractive to anyone,” he said. “Black, white, Hispanic … it doesn’t matter. We’re bringing diversity together and creating great things. I have a creative mind and that creativity comes out behind the brand, which is made up of all kind of unique people who are representing the Frequent Flyers Lifestyle.”

He said many from the area have begun to recognize him and his crew because of the signature backpacks that they always carry with them. Similar to “backpack rappers” from a few decades ago, Jitsu and his friends are trying to create a persona of artists who are always working, always creating and always bring forward new music.

One of the most recent hits he’s released to the world is a single called “Rolling Stone.” It’s one of the singles off the album “Doped OWT,” which is a collaborative album between Jitsu and producer Beeks Vybe. The album includes features from Tra Norwood, JohnnyBoiWonder and Evan Dupri. It’s an album that he said opens the doors for his fans to bond with his music on a deeper level while creating a medium for them to live his life experiences through his music.

“’Rolling Stone’ is a song that talks about past relationships,” Jitsu said. “Right now I’m focused so much on becoming an up-and-coming artist that it demands all my time. I’m grinding and taking care of business – hustling and traveling and staying up late nights. Because of that I can’t commit to deeper relationships. I have to take time off from romantic relationships and sacrifice some of those things so that I can chase after my dreams and go after my goals. That’s where the name of this single comes from – even though I’m working hard, I’d rather be rolling with you. I just hope that you understand I’m out here working on my career and you’re still with me and staying loyal. I hope you understand why I’m married to the game right now and if I have to do anything to further my career I’m gonna’ do that first.”

Jitsu said the single is one of those songs that just let you sit back and groove, though it has a bounce to it.

“It’s real groovy,” he said. “You can groove to it. It’s one of those beats that I’m constantly drawn to because it’s different. I love hearing different beats – different beats put me in different moods and I could freestyle all day if I wanted to. But weird, unique sounds intrigue me and make me want to write. This song is one of those that were born from that process, and like most of my music it tells a story.”

Appropriate for an artist whose name is Jitsu Gaiden, which he said is an Asian translation for “technique” and “story.”

“I’m telling my story through the technique of my music,” he said. “I love the Asian culture and I grew up watching all the Bruce Lee martial arts movies and Dragon Ball Z. When I was trying to think of a stage name, I wanted it to be original and unique. I thought if I could make myself into a character, it would be weird and cool to be an anime character. When I started looking up Asian words I found the meaning for Jitsu Gaiden and it seemed perfect.”

Fans who want to check out some of Jitsu’s music and watch the music video for “Rolling Stone” can visit his website jitsugaiden.net. Fans can also follow him on social media on Instagram, Twitter and Facebook for updates about new music releases or live performances.

Posted by ashleyburnett at 10:35 PM