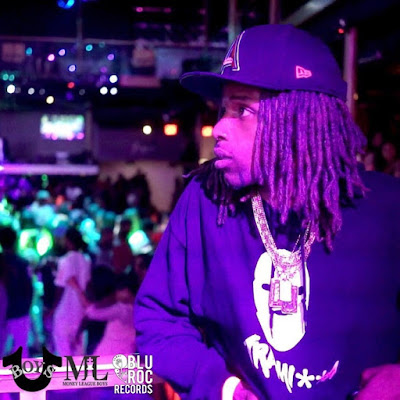 CHARLOTTE, N.C. – One of the hottest new artists to join the Money League Boys at BluRoc Records is Dominic Nicholson, AKA Bagzamilleon. Born and raised in Rochester, New York, Bagzamilleon moved to Charlotte, North Carolina to further his music career after a short stint in jail, and it wasn’t more than six months before his music was catching the attention of producers and record labels throughout the region.

Already he has landed two songs on Dame Dash Hip Hop Radio (songs No. 3 and 18 on Spinrilla). And recently he was able to work with Rocko From ATL – the same producer who signed Future. The two worked together on a single called “This is What I do,” which was put together by DJ Lightouts out of Virginia. Bagzamilleon said his newest single is called “Trap Mogul” – inspired by Music Moguls – and will be released in early 2017.

“It’s a song that talks about how I come from my city and my era of growing up, and how people from there were always hating on me,” he said. “I’ve experienced a lot of different things. I used to have money growing up, and then I went through a period where I was homeless and I had to hustle to make a living. Now I don’t have to hustle anymore. I used to eat noodles, but now I eat Benihana. I know that the idea of a trap mogul is someone who has sold more than a million units, but I already think of myself as a trap mogul because I know I have what it takes to make it big. This song conveys the idea of somebody who has made enough money that they don’t have to struggle anymore.”

Bagzamilleon said the song should serve as a kind of motivational call to action for anyone who listens to it. In fact, he hopes all of his music inspires others to do something more with their lives.

“I want them to understand that you can make it if you keep grinding hard,” he said. “Someone like me – where I come from and the type of area I’m from is like crabs in a bucket – and to make it out of that bucket you have to work hard. No matter what you do, just keep grinding and you’re going to make it. Because of my hard work, within six months I landed a song with Rocko.”

It’s not just inspiration that he hopes to pass along through his music. Bagzamilleon also wants people to have a good time. In fact, music and motion almost go hand-in-hand for him. As a person who has always struggled with ADHD, Bagzamilleon has always had a hard time sitting still. It made sense for him, then, to pursue dance. And so for every single that he releases, he also creates a dance that goes with the song – something that fans can enjoy while listening to his music at the club or even at home.

“My voice and my energy are what make me unique,” he said. “I’m always jumping around and I’ve always been moving, and so I make trap two-step dances. If I make a song called ‘Walking Trap House,’ I’m going to make a dance for that song – a two-step dance that you can move to. If I make a song called ‘Pound Runner,’ I’m going to make a dance that goes with it – like a pound dance that an African tribe would do. I love rocking to the beat. I’m not just going to stand there when I hear good music. I love being at live performances where I can jump in the crowd and get in their face and look them in the eye and be very energetic.”

Posted by ashleyburnett at 8:59 PM