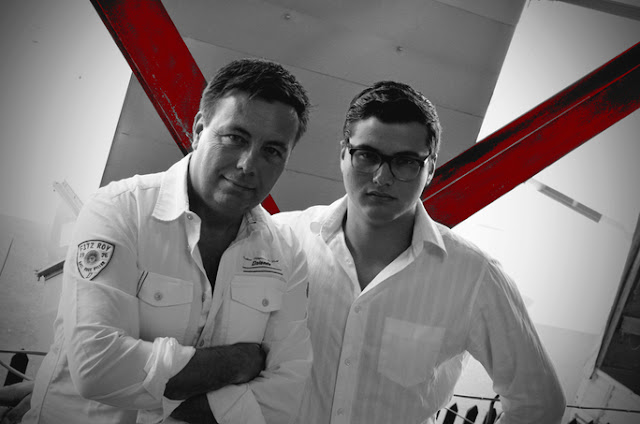 SWITZERLAND – You never know when lightning is going to strike.

For Kevin Christen and Benno Leuenberger, it struck at the end of a two-day intensive DJ workshop at the Ministry of Sound Academy in 2013. The two musicians had enjoyed years of success working in the genre of House music throughout Europe as Precious Kay and Sin Gin Smythe, respectively, but something unexpected happened while they were at the DJ workshop. Two weeks later the duo began work on the project now known as “Double Impact.” Two singles from the album – “Looking for a Kiss” and “Elevate Me” – were released earlier this year and both reached No. 1 in the U.S. House charts. They’re hoping that their next single release, “Voodoo Girl,” will have similar success.

“At night during one of the nights at the workshop, Kevin started playing tracks and left it at a certain spot and I just kind of took over,” Benno said. “We didn’t have to say anything to each other, there was just kind of a blind understanding … and we just played for hours. There was this understanding that we were friends in mind or brothers in arms.”

“The chemistry was absolutely great,” Kevin said. “Right away we were able to mix our tracks and skills together. That was the start of our joint career.”

What’s perhaps most intriguing about the duo is that Benno is 28 years older than Kevin. They’re each residents at two clubs in Switzerland where they headline shows a couple of times per month and perform gigs upon request. They also perform regularly at festivals and national events. And everywhere they go, fans comment as to the unique sound that comes from such an unlikely pairing. The 28-year age gap is an unprecedented strong point for the duo – bringing together the vast experience and deep understanding of timeless musical movements of Benno with the hunger and modern outlook on music of Kevin.
“House music has a big variety,” Kevin said. “There’s house, deep house, tech house, funky house – and all of it is great music to make. When you put in vocals, it makes it diversified but also deeper. Ultimately, though, you can play a lot with house music. After our first meeting at the workshop, we were both making great music within the electronic medium and we thought that we should do something in this direction and try to make the best music style for us.”

Toward that end, “Voodoo Girl” features vocals from a San Diego-based artist known as Jessica. The song is a haunting tale of a girl from New Orleans who is spurned by a lover and ends up using her voodoo magic on him in retaliation.

“We visited New Orleans recently and we were very fascinated by the southern comfort and Louisiana style,” Benno said. “We also loved learning about the history of the area, and we quickly discovered that voodoo is a part of that culture. Kevin actually has some South American origins and roots, which also includes voodoo as a practice of its people, so we thought it was appropriate to explore that idea through our music.”

As their popularity has continued to grow throughout Europe – headlining at some of Switzerland’s top events, clubs and festivals, such as Kaufleuten, Club Diagonal and Wake the Lake Festival – they’re hoping that it will grow even more by expanding across the pond into the U.S. with this new single.

Fans who want to get a taste of Double Impact’s music can do so by checking them out on Reverb Nation, Soundcloud or YouTube. Fans can also follow them on social media on Facebook, LinkedIn or Flickr, or download their music on sites such as iTunes, Spotify and Beatport.
Posted by ashleyburnett at 9:09 PM