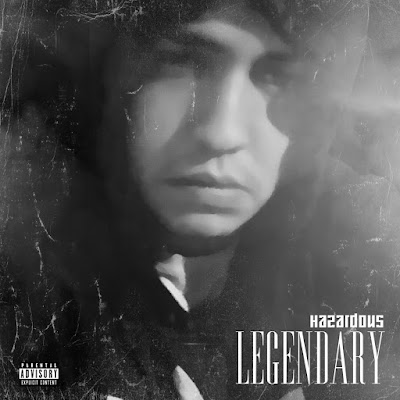 LONDON, U.K. – It’s hard to break into the hip-hop scene living in London. Joshua Freed – AKA Hazardous – knows this first-hand. When he first started rapping, most people called him a wanna-be and no one appreciated his music. Now at age 22, his talent as an artist has grown and the bullies’ mouths have shut in the face of his success.

He considers it his legend – and it’s that story of success that he shines a light on with his new EP “Legendary,” which was recently released and is available for purchase on iTunes.

“It’s everything I know about music in the span of four tracks,” Hazardous said. “The title speaks for itself. It’s my interpretation of what I’m expecting to get out of music, life and the whole game of hip-hop … and what I believe the game to be. I’m trying to push the music further than I’ve ever done.”

The EP starts with a track called “Legendary,” which is a nod to the album’s theme. The second track, “Stroke of Genius,” is a take on what he believes to be true skill when it comes to rap. In the song he talks about his inspirations and the people he looks up to and how he wants his talent to represent hip-hop in the same way those artists have. The third and fourth songs, “Inspiration” and “Pass Through,” are motivational tracks that he hopes people will hear and feel inspired to keep pushing through hard times and adversity.

“That’s really the message I’m trying to send across with my music,” he said. “Knowledge is power. That’s what I’ve always believed ever since I started learning what I know now about music and the industry. Even when you feel like you don’t know, you need to keep going and do whatever it takes to get better.”

Hazardous said he started writing music at age 11. By high school he was performing in school shows and experimenting with freestyle rap. At the time, he thought the faster a person could rap the better they were. Today, however, he aspires to be more like 2Pac and Eminem in that they mix powerful lyrics and attractive beats to create a flow that is undeniable. He hopes that as he displays his musical talents to the world, he’ll show the industry that he’s a force to be reckoned with. That’s why he chose the name Hazardous.

“I have a strong belief inside of me that my artist name makes me stronger than I actually am,” he said. “I’ll take a topic and I’ll stretch it to the point where I can actually make a song out of it. And I genuinely believe that knowledge is power. Music for me is a like a puzzle – it’s fitting all the piece together of lyrics and beats and hooks and timing. I used to flow off-beat, but that’s because I didn’t really know how to flow. Now I believe in timing – and that’s because I learned something. Knowledge is power. At the end of the day, you need to know how to stand out, and I believe and know that I can stand out from the crowd. All I do is music. It’s all I believe I can do and will ever do. And I want the world to see what I’m made of.”

To get a taste of Hazardous’ music, fans can purchase his EP on iTunes. Fans can also follow him on Twitter @JoshuaFreed93.
Posted by ashleyburnett at 2:30 PM