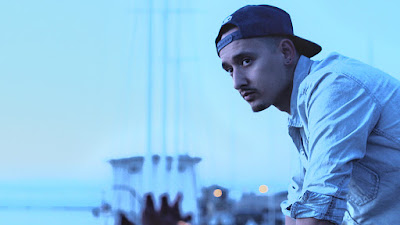 REDWOOD CITY, CA – When Chris Anthony first told people he wanted to make music, most thought it was just a gag. The people from his home town in the Bay Area of California assumed he was trying to get some girls or increase his popularity. But Anthony said making music for him isn’t anything like that. In fact, making music is such an integral part of his life that it’s almost as natural as breathing.

“Making music is just something I have to do,” he said. “My soul was telling me to do it. It’s a higher calling. It’s not a persona – it’s just me being myself and talking about things I’ve experienced and putting that into music.”

Anthony said he loves the outlet that music provides for his raw emotion. He said his unique sound it a mix of trap and pop and R&B and hip-hop, all combined into a soulful sound that is 100 percent him.

“I have my influences and people I like to listen to, but my music is 100 percent me,” he said. “I’m not trying to copy anybody’s style. Too many people are trying to be carbon copies of other artists, but everything I write is 100 percent me. I just put myself out there.”

Anthony said there was a time in his life when he felt like a “tainted soul.” He had a lot of anger about previous relationships and a lot of experiences throughout his youth where lost some of that young innocence was particularly painful. It was through the exploration of those feelings and self-doubts that a lot of his early music was formed.
In the 10 years since, Anthony has put a lot of study and research into what it take to become a successful recording artist. He’s honed his sound and has modeled his career after other self-made artists. And now he’s just about ready to release his first album, “Black Heart.” Eight of the 13 tracks on the album are already complete, and Anthony said he’s planning on releasing it in January 2017.

“Black Heart is dedicated to that feeling of figuring it all out,” Anthony said. “It’s dedicated to people who are misunderstood and people without a voice, people who are hurt by things and won’t speak out. This album is a portrayal, from my point of view, of life. Things aren’t all great and happy and PG rated all the time. This is real life, and this album is about getting through the different things that have caused me pain – and the cool things, too. It’s unfiltered – not distasteful, just honest and real. ‘Black Heart’ stands for being hurt and broken, but overcoming that – realizing there may be a problem and pushing through it.”

The first single off the album, “Juice,” is one of the best examples of that unfiltered approach to Anthony’s music. It’s a song about a girl that a guy knows he always has the upper hand on. Anthony said he’s observed that almost every girl has a guy in her life that they’ll always go back to – no matter who they’re with at the time.

“There’s always an open spot for you and she’ll let you slide back into her life no matter what the situation,” he said. “That’s what the song’s about. There’s a line in there that says, ‘You better tell him you don’t have the juice like that,’ which just means that she’s settling with that other guy and that he doesn’t have the same swagger that I do. And that’s the kind of music on this album. There’s a song that talks about the feeling you get when you’re driving to a girl’s house to sleep with her and how you have her where you want her. But there’s also a song about being hurt by a girl and how deep that pain is. There’s always someone you’ve had a romantic relationship with who’s gotten the better of you. And this album explores all the emotions that come from those things.”

Anthony said he doesn’t want people to pigeon-hole him into a reputation for being a morose ballad singer, and so he’s already started looking ahead to a second album that will be more upbeat and feature a lot of trap, pop and “worldly music” that anybody can listen to.