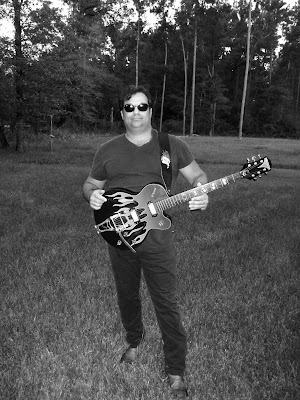 New Orleans – Since the moment Boyd Edwards, known to fans as “Binkie Blues,” got his hands on a guitar, it’s been musical serendipity. The self-taught musician was raised in the rich, cultural hotspot of New Orleans with a deeply embedded respect for the blues. He recalls his childhood, reminiscing about growing up to the melodies of Muddy Waters and BB King; his father introducing him to the musical heroes that would inevitably inspire his music’s persona. Above all, however, Binkie Blues is a storyteller, using his words and slide guitar to take the listener on a melodic and emotional journey. His career began writing music for advertisements and film, but 2016 marks the beginning of his career as a solo artist and self-proclaimed storyteller. “I kind of look at songs as stories, I look at songs as little movies being played in the listeners head,” explains Binkie Blues.

The artist has experienced and witnessed more than most. Binkie Blues has been to war and back and worked as a paramedic. As he puts it, “I’ve seen the worst life has to offer. But what I’ve found is that in all that pain and hurt and everything, there is greatness.” That greatness and hope drove Binkie Blues to record his first EP, In Plain Sight. Boyd is both a father and combat veteran, and fans can expect to hear him draw inspiration from every role he’s played in his full, adventurous life.

Refreshing, honest, and hopeful; Binkie Blues is an artist to watch.
In Plain Sight will be available on all digital platforms on September 6th, 2016.

Posted by ashleyburnett at 7:13 PM