There are very few artists who have the credentials of Raw Dizzy. His background in New Orleans, Louisiana’s rich entertainment history includes being a founding member of Lil Wayne’s Sqad Up where he worked alongside not only Lil Wayne, but also Kidd Kidd, Fee Banks, Gudda Gudda, Supa Blanco and more. Prior to that, Kidd Kidd and he formed a group called Tragedy. Dizzy’s lyrical ability is almost unrivaled. His vocabulary is huge; his presence is even larger. Well-respected by fellow artists and DJs alike, Dizzy has the innate ability to charm those around him and then surprise them with his hunger for success. Hard working and keenly intelligent, he is set up for a triumphant victory. In addition to music, Dizzy is a successful real estate mogul in the making.
Raw Dizzy’s latest offering is a single entitled “I Ain’t Lying”, a regal track produced by Grammy nominated, BMI award winning super producer Blaqnmild, internationally known for Drake’s “In My Feelings” and “Nice For What”. Dizzy has been working closely with Blaqnmild on the upcoming “UptownDowntown4” album, a collaboration with the legendary Skip (of Juvenile’s UTP imprint). Raw Dizzy proudly represents his Downtown Ninth Ward neighborhood, while Skip reps Uptown (the 17th Ward’s Hollygrove). The pair have joined forces to work on this special project in an effort to unite their city’s music scene.
“I Ain’t Lying” is available on all platforms. The visuals are available on YouTube. Jimi Clever of Angel Wing Films shot and edited the video. New Orleans music architect Mr. Meana (of Partners-N-Crime fame) directed it. 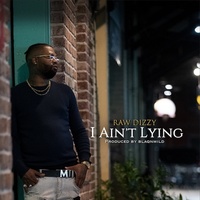