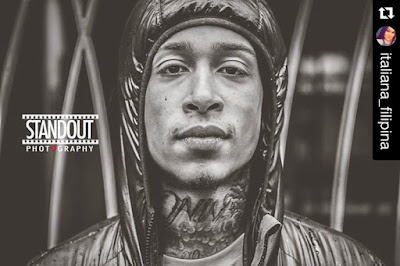 SEATTLE, WA – Everything about Dony’ae Allen is chill … even his stage name, Yae Hood Tha Astronaut.

It’s a name born from his roots on the streets of Seattle and his penchant for creating music that puts other people at ease. His new mixtape – a 12-song collective of music he’s created over the past few years – is called “Burn Notice.” It’s a project that he said not only nods to the image and persona he’s worked hard at creating, but also gives fans an inside view into his day-to-day life and the things that inspire him to create music.

“The name of the album came from all the smoke in my life,” Yae Hood said. “Any time I’m anywhere, I’m smoking a lot. It’s also a notice that I’m on the scene and I’m here to stay. The songs talk about a lot of the things I do or have done. There are a lot of stories – in fact every song off ‘Burn Notice’ is a story about me.”

The first song, called “The Breakdown,” is a perfect example of what he’s talking about. Not only does it literally break-down a day in the life of Yae Hood, but it also explains how his unique style and image separates him from other artists.

“My sound is different,” he said. “I like to make kick-back music and chill music. From time-to-time I’ll switch it up to keep it interesting, but in the end I create smoking and riding music – the kind of music you can just chill out and vibe to. Good times and good vibes – any time you hear my music I want you to get a good feel from it.”

Yae Hood said he’s taken inspiration from other artists along the way as he’s worked to develop his own unique sound. Currency is the artist he points to as perhaps his biggest influence, with another nod to Whiz Khalifa. He even said he’s inspired by some of the up-and-coming artists throughout the Pacific Northwest and he hopes that he can join their ranks while shining a light on the quality artistry and music coming out of that region of the country.

“Burn Notice” is actually the sixth mixtape Yae Hood has released. His previous release was a mixtape called “King PNW,” which has received modest success throughout the Pacific Northwest and has garnered him some attention from others around the country. He said he hopes this new mixtape will be the one that launches his career even more into the limelight and helps others see an emcee who makes hip-hop different from anyone else in the game right now.

Posted by ashleyburnett at 11:11 AM