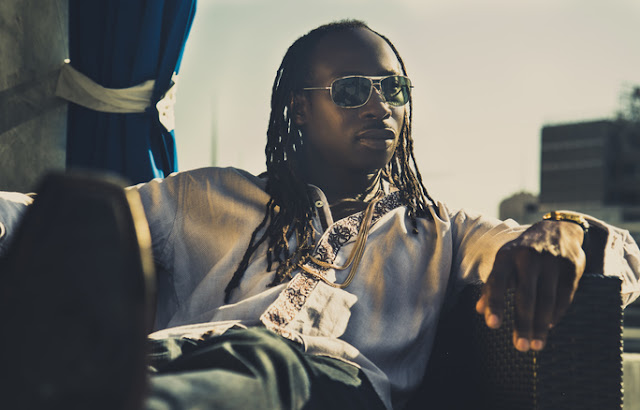 LOS ANGELES, CA – With a name that translates to “one that wakes into royalty,” it was destiny that the artist known as King Ajibade would one day reign over a music career that spans the globe.

A Nigerian native, Ajibade has traveled the world sharing his music with others. Today, he operates out of Los Angeles, and his latest EP is an invitation to join him on his global excursions through music. It’s entitled “Passport,” and he describes it as a “visualization of different things I can do as an artist.”

“There are a lot of different genres I go into,” he said. “It’s like your passport to travel the world through music. If you want one, we’ll give you one.”

Unlike a lot of other artists out there who hone in on one genre, or who experiment with “global” sounds, King Ajibade perfectly fuses a variety of genres – bridging Caribbean, African, Latin and pop with elements of EDM, reggae and hip-hop.

He started his solo career in 2011 with the single “Waiting for You” under his own label, 26th Element Records. The single was followed by the “Bad Boy In Disguise” EP in 2014, which he said set the foundation for this newest EP.

“‘Passport’ is a deliberate move into the international world of pop,” he said. “The music is meant to travel the world. Life can be so stressful, and I want to help people enjoy it.”

The first two singles off the EP have already been making waves among fans. The first is a single called “Excuse Me Lady.” It’s also a dance and club song, with lyrics that describe a guy trying to get to know a girl in a club. It’s a song that many guys will be able to relate to, and many women will enjoy, as well.

The second, “Island Girl,” has a definitive Caribbean flare with some notes of reggae and pop mixed in. It has a catchy hook that fans won’t be able to ignore. It makes for a perfect song to have playing at a party or to groove to at a club or while hanging out with friends.

King Ajibade said many of the lyrics for his songs are pulled from his own life experiences, or simply vibing off of whatever inspires him at the time. He said he likes the music to come to him organically rather than to force it.

“When you can do the whole song in your head before you produce it … that’s cool,” he said.

Through all of his lyrics and music, he hopes to pass along one simple message to anyone who hears him: have fun!

“You only live once,” he said, “so live life and have fun and just live. My music is a mixture of all that stuff. It’s not political, but I can go that way sometimes and get a little deeper. But I want you to have fun while you’re there. Regular life is sometimes not that much fun. With music … when you get there you can enjoy it and escape from regular life for awhile.”