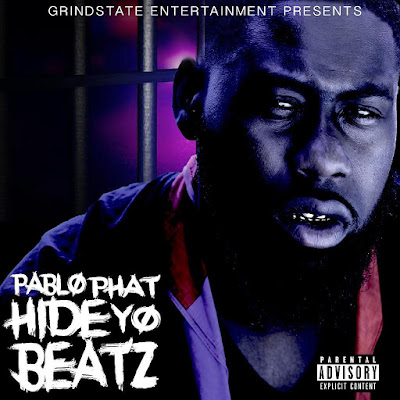 PALM BEACH COUNTY, FL – When Pablo Phat was doing time in prison, there was one thing that helped him stay sane. It was a dream, really – a promise of something bigger that would come after he was released from prison. And that dream was sparked by a book about Pablo Escobar – a famous Colombian drug lord and drug trafficker.

“I’d read a lot of books in prison, and this book really inspired me because it was the story of a man who made a lot of money and came from nothing,” Pablo Phat said. “That’s the type of money I’m looking for. That story of his life – of his determination and coming from nothing – really hit me. Phat was already my name – I’ve had it since I was young – and it was a no-brainer to add Pablo to the front because that’s what I’m trying to represent.”

The first step toward making that dream a reality is here in the form of Pablo Phat’s latest mixtape, “Hide Yo Beatz.” It’s a project that he said is a bit of a throwback to some of the old classics. The 22 songs feature a mixture of raps coupled with sounds that fans have requested of him over the years.

“It’s a nice little vibe,” he said. “I’m rapping on different beats and throwing in some of the old classics and it’s been getting a lot of good feedback.”

The first single off the mixtape is “Killers Everywhere.” It’s a song he said was inspired by various situations that have happened in his own life. He said most of his music is written in such a way that he hopes others will relate to it.

“It could be a moment and they get it,” he said. “It could be something that I’ve done or experience or been through, and they hear it and it might be something that makes their day. I think I bring the old sound back while I’m talking about real situations and day-to-day life – things that people can really relate to. And with my music they can feel where it’s coming from.”

He said his ambition is to rise above the struggle and share his talents with the world. Ultimately he hopes the dreams that were started in prison will become fully realized and he’ll elevate to something bigger with his music career and “go to bigger and better places.”

Fans who want to sample his new mixtape can visit his Soundcloud page or his YouTube page. Fans can also follow him on social media for more information about future music releases or live shows. Look for him on Facebook as pablophat, Snapchat as PabloPhat6, Instagram as PabloPhat and Twitter as PhabloPhatgse.

Posted by ashleyburnett at 3:54 PM