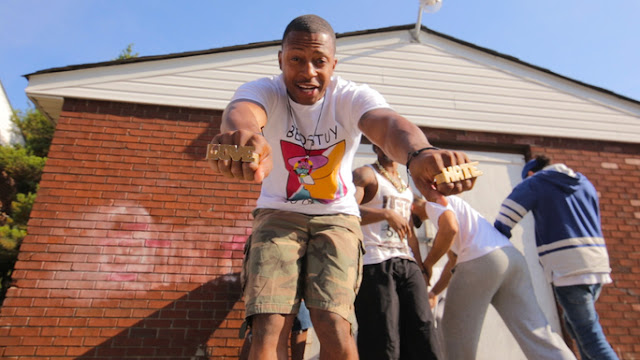 BELLEVILLE, N.J. – When Marcus Jones was serving overseas in the U.S. Army, his official title was Officer of Fun.

Ok … so maybe that wasn’t his official title, but it would have been appropriate as the Sergeant in charge of volunteer groups. He was literally the one in charge of helping single soldiers find better opportunities to let loose and enjoy their free time while serving overseas. He became known in Germany, and then again in Afghanistan, as Sergeant J – the officer who knew how to throw a dope party and who could rap like nobody’s business. That eventually evolved into the stage name that he’s known by today, J Maddix.

He was so good, in fact, that he made somewhat of a name for himself in the music industry while serving in Germany. He recorded some songs in a studio and was set to take a tour across the U.S. after finishing his time with the Army.

“It started one week when I got some down time after getting my wisdom teeth removed,” J Maddix recalls. “I didn’t have to work for five days, didn’t have to shave, didn’t have to do nothing. So I started messing around with some beats, and I could always rhyme. I made something and I thought it was dope and I let my friends hear it, and they thought it was dope, too. One of them sent it to Pretty Ricky, a producer back in the states, and he liked it so much that he told me to come record it. So I flew to Florida for a weekend and recorded and then came back to Germany. After awhile the supporters in Germany started to peak, and I was ready to come back to the States and I thought things were perfect. I had shows lined up and stuff. But unexpectedly I was ordered to be deployed to Afghanistan, and I knew I had to put the mission first. I thought my mission was to come back and take the music where it needs to go, but I had to go to Afghanistan first. That mission is complete now, and even though I lost some of the buzz about my music, I’m proud of what I did and I’m ready to take my music career as far as I can back home.”

It didn’t take long for his return to music to be noticed in the U.S., and it was because of the timely release of a single he wrote while serving in Afghanistan called “Radio Raheem.” He recalls that while on patrol one day in Afghanistan, the line “Fight the Power” came into his head from the movie “Do The Right Thing.” The character who said the line throughout the film was a guy known as Radio Raheem. J Maddix was inspired by the memory to write a song. It was a single that got some positive feedback from his friends, but he didn’t do anything with it until coming back to the U.S. And then, unfortunately, the actor who played Radio Raheem died in October of this year. As an homage to the actor and the character, J Maddix decided to release the single.

“It has an old-school hip-hop feel to it,” J Maddix said. “When the actor died, a friend of mine encouraged me to release the single so that people could share in the memory of him. So I went into the studio and recorded it that night. My twin brother (Maurice Jones, former Chicago Bear cornerback) was able to come into the studio and lay down some rhymes with the song. Once we released it, fans just went crazy with it. We used the tag #radioraheem all over social media, and the buzz has been going like crazy ever since.”

J Maddix is ready to follow up that release with another project, and he’s already lining up live shows – such as the show on Dec. 7 in Queens as part of the Major Record Label Music Showcase. Fans who want to find out more about his live shows or music releases can follow him on social media on Facebook or Twitter. Fans can also sample his music by visiting his website jmaddix.com or going to his Soundcloud or YouTube channel.

Posted by ashleyburnett at 2:41 PM