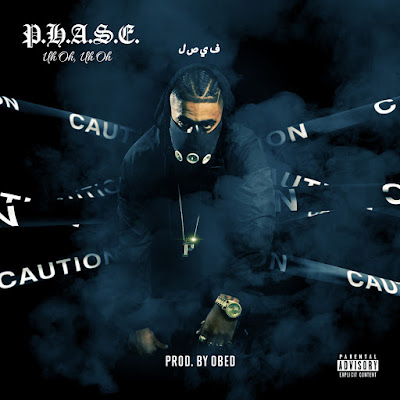 TAMPA, FL – When it comes to success, most people in the music industry have advised P.H.A.S.E.  to just ride the waves. But P.H.A.S.E. isn’t one to merely go with the flow. He’s an artist who wants to bring new waves in and set new trends.

It’s a storyline that has followed him most of his life. Originally from Kuwait, P.H.A.S.E. grew up with a single mother and the oldest of three children. He often would spend his nights away from home, out on the streets getting into trouble while trying to find his place in the world – always dreaming of something bigger and better. At age 12 he found an outlet through boxing, and pursued the sport professional for a couple of years. From age 14-to-17 he evolved into a professional weightlifter. Eventually he found himself in clubs playing a lot of pool – so good at it that he became a semi-professional. But that wasn’t what interested him. He had a dream to make something of himself. He had a dream to travel to the U.S. and get a college degree.

And so, at age 17, that’s exactly what he did. He came to the States with a student Visa, and now five years later he’s about to finish a bachelor’s degree and is beginning to make new waves in the music industry. It’s the many transitions in his life that he says contributed to the name P.H.A.S.E.

“I go by P.H.A.S.E. for many reasons,” he said. “I went through a lot of changes that only made me better. But my story is a little different as I’ve only been in the U.S. for four years. I also go by that name because I can change and switch between musical genres – I can do all types. I’m making new waves in music.”

The biggest waves are coming about through his music group, called “7.1.4.” It’s a group he describes as a rap group that embodies the definition of diversity. There are seven people in the group – all of them brought together through school when they shared a two-bedroom apartment. Every member of the group is of a different race – from Arabic to African American to Caucasian. The group, he said, very intentionally promotes diversity and brotherhood.

“We love each other to death,” P.H.A.S.E. said. “We don’t discriminate. We accept any type of people who come to us. And everybody we know has come to respect us for that, even though we live in a somewhat aggressive and violent area of the country. We want to start a movement, and people are starting to follow.”

One of his first singles, “Uh Oh, Uh Oh,” has recently been released and is also starting to make waves with fans. It’s a self-described “island vibe” song that nods to the tropical weather that Tampa, Florida is known for. P.H.A.S.E. said it’s a song he wrote after a breakup with his ex-girlfriend, who at the time was trying to explain why she had done some of the things that she had.

“The song says that you can mess up once and even twice, but don’t try to lie to me a third time because I’m blind to any made up explanations,” P.H.A.S.E. said. “Sure, we can still hang out … but I can’t trust you anymore.”

Fans who want to check out the song can do so on his Soundcloud page, or on ReverbNation. Fans can also follow P.H.A.S.E. on Twitter @TB_714. Two other singles are also available on Soundcloud – “Te Amo” and “Hold You.” P.H.A.S.E. said he’s planning on releasing a mix tape toward the end of the year or shortly after the New Year.
Posted by ashleyburnett at 3:58 PM