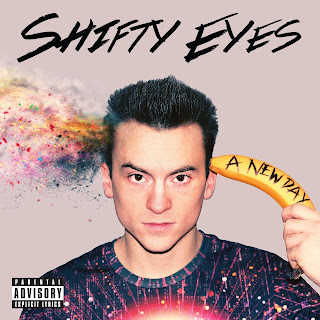 ALBERTA, CANADA – Shifty Eyes has always been energetic. It’s how he got his name, in fact. When he was a child growing up on the streets in Alberta, Canada, his friends called him by any manner of nicknames because he was small, wiry, extroverted and talkative. In particular, they’d playfully call him Shifty, and when one day a friend started calling him Shifty Eyes, the name stuck.

Today Shifty Eyes uses that energy and penchant for verbosity as an up-and-coming musician. Over the past three years he’s toured across the U.S. and recorded hundreds of songs in collaboration with other artists and producers. He has now returned home to Alberta to focus on promoting his most recent project – a mixtape of 20 songs that he says embodies the journey he’s taken throughout his career. The project, entitled “A New Day,” was released in April and has been making waves. Over the course of the next few months he’ll be releasing new music videos on YouTube for songs on the mixtape. In November there will be a new single and video release, as well.

“When I found music, it was a light in my life during a dark time,” Shifty Eyes said. “And for a long time my music was darker because I was using it as an outlet. It took me awhile to mold myself, and I’ve amassed a huge compilation of music that I’ve made with other producers over the years. Those songs show you a plethora of experience. I’ve grown, and now I have a plan and a structure to my music. This mixtape is kind of a stamp of authority of my music, and it takes you on a journey. It starts with some of my hard-hitting trap music and then leads into more of a laid-back vibe. There are songs that talk about family. There are songs that talk about moving forward past addictions. Ultimately, every song has an injection of positivity in it.”

Over the past three years, Shifty Eyes has been working relatively alone, surrounded by a small group of like-minded musicians, trying to build a name for himself. He has organized his own events, recorded and produced his own music, and even established a brand. After making some waves in the U.S., Shifty Eyes has set his focus on getting his music and message heard by the masses. “A New Day” highlights his lyrical creativity, reflecting his struggles and growth as an emerging artist in the digital world.

“When people hear my music, I want them to discover a sense of purpose,” he said. “That’s my goal. There’s a quote I heard from RZA awhile back where he said, ‘If one thing happens out of my music, I hope it’s that I can touch one person and help them out. That’s my idea of success.’ And I agree with that. I have a big dream. I want the access to be able to talk to people and mesh with communities. I think we’re in a time right now where it’s really hard to talk to your neighbors. There aren’t enough voices out there who have the balls to say something to affect change. I want to be a voice for positive change.”