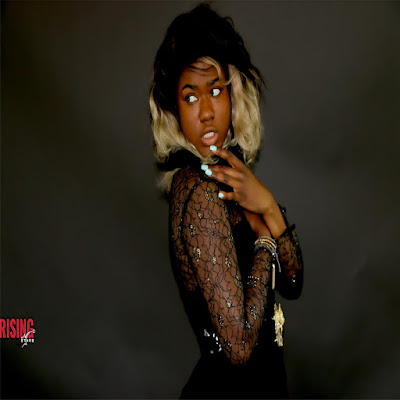 BOSTON, MA – Insects eat plants. It’s an unbreakable law of the universe … except in one instance: The Venus Fly Trap. It’s the only plant in the world that actually eats insects and does something unusual. It breaks the mold, which is exactly what up-and-coming artist Kettie Munroe is doing.
Her new EP “Venus FlyTrap” is a testament to the type of music she makes – music the breaks barriers and pushes against trends and is unique is so many diverse and enlightening ways.
“I may not fit the mold, but that doesn’t mean I can’t be successful,” Munroe said of her music career. “I don’t look like everybody else or sound like everybody else. But I think that’s what my fans will appreciate about me. With this new EP I wanted to be unique and stand out. It’s a little bit out there, but it’s very honest. But I don’t like to sugar coat things. I’m very straightforward and very real. Ultimately I’m just trying to be Kettie Munroe and be as original as possible. A lot of times today you turn on the radio and everybody almost sounds the same – you can’t tell which rapper is which. And trends are great, but what happens to that artist when the trend is no longer a trend. I want my music to be great outside of that cycle of trends.”
As listeners follow Munroe through the five tracks on the EP, they’ll follow a story that unravels the evolution of her music career over the past decade. What started as an innocent audition as a young teenager has blossomed into a promising career for the 23-year-old musician. Songs that she wrote three years ago blend with songs written three months ago, magnifying the changes and evolutions of her life through disappointments from the business side of the music industry, to battles with ownership rights and the discovery of her own unique sound.
“None of the songs on the EP sound like the last one,” Munroe said. “They all sound completely different. But all of the tracks flow together, and you’ll even notice some cool transitions between each one. I’ve had people describe me as an alternative pop singer and songwriter, but my music can really be anywhere between hip-hop to dubstep to just pop in general.”
Munroe describes herself as a “90s baby” and points to influences from that era – including Aaliyah, Janet Jackson and Madonna. In fact, it was music from these powerhouse female musicians who helped form her understanding of the English language. Her parents came to America from Haiti and spoke only French Creole – a language that became native to Munroe. It was records of Michael Jackson and the Beatles played for her by her father that first helped her learn English. And by age 13 it was the inspiration of those female singers of the 90s that propelled her into songwriting. Learning how to take the pain of personal tragedy and put it into her song lyrics was the final piece of the puzzle that eventually came together during her high school years.
“That’s when I learned to pour my heart and soul into my music,” she said. “I went through some really tough things, and music helped me figure stuff out. Good music is about the emotion that you bring into it. As I got older, I got better at bringing all those things together.”
“Venus FlyTrap” is available for digital download on all streaming sites. Fans can also listen to Munroe’s music on her Soundcloud page, or follow her on social media on Facebook, Twitter or Instagram.
https://soundcloud.com/kettie-munroe
https://m.facebook.com/Kettie-Munroe-107523029396124/?ref=bookmarks
https://www.instagram.com/kettiemunroe/
https://mobile.twitter.com/search?q=kettiemunroe

Posted by ashleyburnett at 3:20 PM