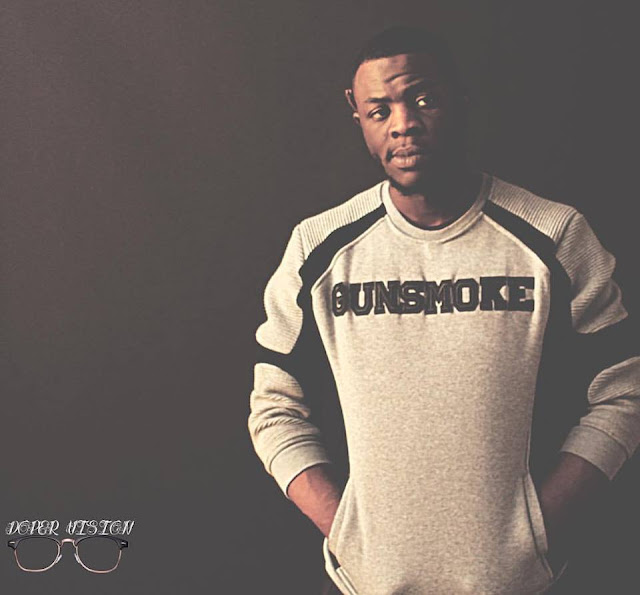 Paterson, New Jersey – Tucked away in industrial New Jersey, you’ll find Paterson, nestled on the Passaic River. Paterson was once known for it’s manufacturing industry (nicknamed “the silk city”) but has since become a place of hardship and crime for the youth. GUNSMOKE (born Dennis Chapman) has experienced and endured adversity, and is breaking through the mold with his newest project. After a tumultuous childhood and several run-ins with the law, GUNSMOKE did soul searching and decided his life was meant for more than what his environment had to offer. Music, a longtime passion and love for the young artist, was his ticket out and up, and now he’s using his talents to set an example for the youth in his beloved community.

GUNSMOKE’s talents originated as a knack for rhyming in the form of poetry. “I was in school, had to write a poem, and I wrote a poem, and liked it – I said, ‘Well, I can rhyme,’ and eventually turned it into rhyming on beats.” Influenced by the sounds of classic hip hops artists such as Tupac, Jay Z, Biggie, and more, the artist pulls old school influence to fuse with new age hip hop. “A lot of artists have shied away from the art of punch lines and making people ooh and ahh to their songs,” explains GUNSMOKE, but he’s not afraid of telling stories with his music. His songs are colorful and full of clever metaphors, with a certainty in his delivery.

The artist’s latest project, a single entitled “No Feelings,” is an inspirational song geared at males. It comes from GUNSMOKE’s perspective, as a man who has reached out of hardship and pain and has come full circle, to tell them that there is more to life than their circumstances.
You haven’t seen the last of GUNSMOKE, who is eager to hit the ground running with his innovative music. As the CEO of his own label, and an artist, he poses this question to his fellow musicians: “How much do you really want it? Is it in you?” One thing is certain: GUNSMOKE is tenacious, hardworking, and is willing to do whatever it takes to be the next big thing in music.

“G.S.R” hosted by THE EVIL EMPIRE on DATPIFF.COM

Posted by ashleyburnett at 10:31 AM